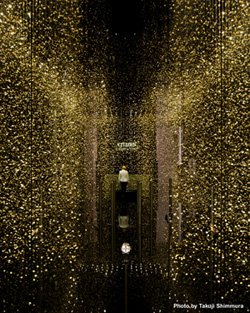 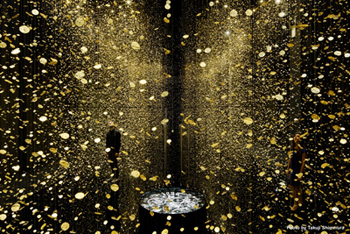 As part of our global branding activities, this year CITIZEN exhibited for the first time at MILAN DESIGN WEEK, the international festival of design, on April 8-13 to spread the message about the wonder of the CITIZEN brand that is opening up a new future for watches. On April 13, the final day, CITIZEN won prizes in two categories in the exposition's official competition, the Milano Design Award Competition: "Best Entertaining" and "Best Sound." Since the awards' inception four years ago, this is the first time one company has simultaneously won two categories.

The theme of the installation CITIZEN revealed at the venue, the Triennale di Milano, is "LIGHT is TIME." A magical space was created by employing around 80,000 main plates, the foundation supporting all other components of a watch. The exquisite, dynamic space generated enormous buzz during the expo, drawing around 50,000 attendees over six days. The excitement was so great an admission cap was imposed on consecutive days.

DGT architect Tsuyoshi Tane, based in Paris, and the CITIZEN design team worked on the installation. Representing the elements of light and time, it was formed according to Mr. Tane's idea: "Light is time. Without light the concept of time never would have arisen." Light strikes the original main plates of CITIZEN, a manufacture d'horlogerie, and ever-shifting light and sound fill the majestic space. With displays inside it ranging from the pocket watch where CITIZEN got its start to the latest satellite-synchronized watch, along with the sophisticated components that form them, CITIZEN prompted attendees to ponder anew the questions of "What is CITIZEN?" and "What is a watch?"

For each of us at CITIZEN, now is the time to start to make the world better. Based on this belief in our brand that "BETTER STARTS NOW," we will not stop here, but rather continue with our mission for a future in which more people wear better watches.

Milano Design Award
Hosted by elita, the Italian culture association, this was the fourth year of the Milano Design Award Competition, in which a grand prize and five category prizes are awarded. The venue is the FIERA in Milan, Italy where the MILAN DESIGN WEEK (Salone Internazionale del Mobile di Milano), an international furniture trade show, is held, but the competition is organized separately and is open to participants in installations in the FUORI SALONE put on throughout the city of Milan. 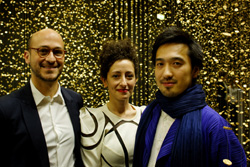 DGT (DORELL.GHOTMEH.TANE / ARCHITECTS)
DGT is an international architecture practice founded in Paris in 2006, and is directed by Dan Dorell, Lina Ghotmeh and Tsuyoshi Tane. The winner of the international competition to design the Estonian National Museum, (to be completed in 2016), DGT has numerous ongoing projects globally, gaining the practice much attention worldwide. In 2008 U.K.-based ICON Magazine selected DGT among the "20 essential young architects.” In 2012 DGT was a shortlisted finalist for the competition to design the New National Stadium of Japan. DGT has won numerous other prizes including the young architects prize from the French Ministry of Culture (2008), the Architects Association of Milan (2008), and the Red Dot Award (2013). www.dgtarchitects.com