TOKYO, Japan, December 8, 2016—CITIZEN will continue its sponsorship of figure skating this winter, supporting five International Skating Union (ISU) competitions in five countries. The supported events this season, which marks CITIZEN’s 34th year as an official ISU sponsor, begin with the Grand Prix of Figure Skating Final 2016/2017 in Marseille, France from December 8 to 11, 2016, and culminate in the ISU World Figure Skating Championships in Helsinki, Finland from March 29 to April 2, 2017. 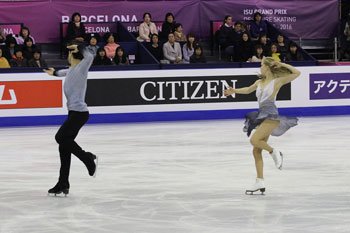 Having supported international figure skating since 1982, CITIZEN is the longest-running official sponsor of the ISU, which is exclusively recognized by the International Olympic Committee as the international federation administering figure skating and speed skating events worldwide. This year’s competitions will bring together the world’s biggest names in figure skating, including Olympic champions and medalists, as well as World and European champions both at junior and senior levels. The 2017 World Championships is a pivotal event in the figure skating calendar, as it will largely determine the number of entries for each country at the 2018 Winter Olympics. Many top skaters have set their sights on a comeback in Helsinki, hoping to repeat past Olympic successes.

“I am very excited about the upcoming ISU Championships and I look forward to competing in Marseille, Ostrava and Helsinki,” said Javier Fernández López, the two-time World Champion and four-time European Champion figure skater from Spain. “The 2016/2017 season is particularly important as we are only 15 months away from the next Winter Olympic Games in Korea.”

This year also marks the 40th anniversary of the world’s first analogue quartz light-powered watch, launched by CITIZEN in 1976. CITIZEN continues to enhance its proprietary light-powered technology Eco-Drive1 and this year launched its new flagship model Eco-Drive One, the world’s thinnest2 light-powered watch with a case just 2.98 mm thick3. The extremely thin (1.00 mm) movement from which the Eco-Drive One takes its name presented many complex technical challenges, requiring CITIZEN to specially redesign almost every component, proving its dedication to pushing the boundaries of what is possible through continuous improvement.

Figure skating involves a similar dedication to continuous improvement and to ideals and values like those that define CITIZEN as a brand. CITIZEN’s brand statement “Better Starts Now” expresses the belief that no matter who you are or what you do, it is always possible to make something better—and the time to start doing that is now. Skaters must constantly strive for better—better execution of clean, balanced movements, linked with intricate footwork, in performances that are as athletic as they are creative in their expressive interpretations of patterns, rhythms, dynamics and tempo. Achieving such excellence in technical precision and artistic style requires continual effort, day by day and moment by moment. CITIZEN believes that its record of invention and improvement driven by discipline and determination makes it the ideal sponsor for the sport of international figure skating—which demands the same of its participants—and continues to find inspiration in the skaters’ performances each year.

CITIZEN is the official corporate sponsor of the following ISU competitions.

CITIZEN WATCH is a true manufacture d'horlogerie with a comprehensive manufacturing process that extends from creating a watch’s individual components to its final assembly. The company operates in more than 130 countries around the world. Since its founding in 1918, CITIZEN have held the belief of “Better Starts Now” — that is, no matter who you are and what you do, it is always possible to make something better, and now is the time to start doing it. Sharing this belief, we have made watches, invented and improved technologies and explored the future of watches such as our propriety light-powered Eco-Drive technology, which originally debuted 40 years ago, and state-of-the-art satellite-synchronised timekeeping.